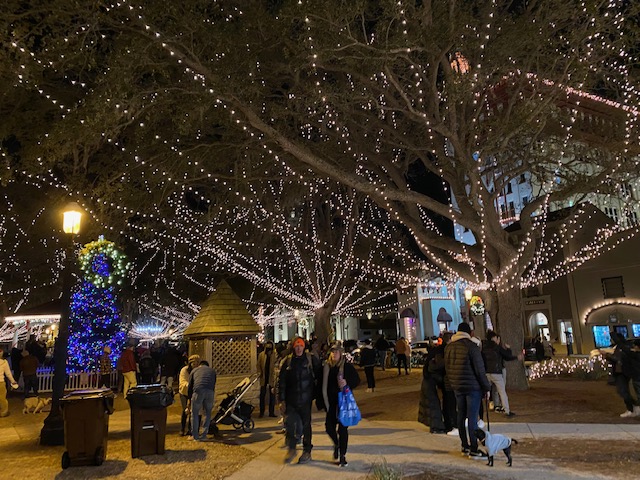 Crowds of joyful tourists thronged the streets of historic Saint Augustine, Florida on Christmas night, and what fun it was to be part of it all.

Strolling along the ancient city’s streets with family, I reveled in the annual Nights of Lights festival, with blocks and blocks of buildings and trees and statues, and every conceivable surface, glowing with tiny white lights.

Open air trolleys cruised past, one after the other, packed with revelers singing along to holiday songs: “It’s a holly jolly Christmas, and the best time of the year…”

Lights from the Bridge of Lions reflected in the bay.

And inside the grand Renaissance Hotel Saint Augustine, in the heart of the historic district, a romantic scene unfolded before my eyes, taking me completely, and delightfully, by surprise.

For a romance writer, it was like watching a scene from a novel unfold.

At the top of a wide staircase, every step adorned with poinsettias, a handsome young man was proposing to his pretty girlfriend as bystanders below applauded. Then, beaming, they walked down the the stairs together, hand in hand, to more cheers.

I cheered, too, for those strangers. Saint Augustine in winter is so romantic.

The town is a gorgeous and adventurous place to visit every season of the year.

But during Nights of Lights, it’s magical.

And the magic is not over yet.

The annual free festival, which begins in November, runs through the end of January; this season ending on January 29, 2023. It’s now in its twenty-ninth year, and has been declared one of the top ten light displays in the world by National Geographic.

Founded in 1565, Saint Augustine is nation’s oldest city, and its Spanish Colonial architecture, along with its many Victorian mansions, is all the more enchanting when draped with lights.

Which means if you’re looking for a place to celebrate the new year, this could be your town.