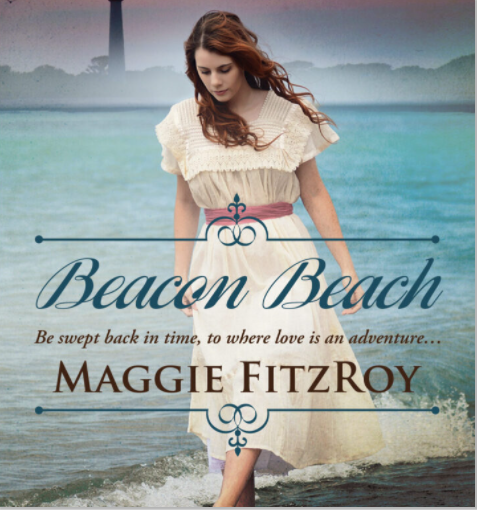 Beacon Beach is a real place, one that existed in 1886, when my historical romance, “Beacon Beach,” takes place, and one which still exists today. It links the towns of Cape May and Cape May Point, New Jersey, at the very southern tip of the state.

No one in real life, however, calls—or ever called—the stretch of sand, sea and dunes linking the Atlantic Ocean and the Delaware Bay “Beacon Beach.” My characters, Jacy James and Cole Stratton, dubbed it that. They were inspired by the lighthouse nearby. As far as I know, the beach has no official name.

But while the area lighthouse inspired the pet name invented by Jacy and Cole, what inspired me to come up with the idea for the story about a young woman who comes to Cape May to find a lost love—and discovers the truth about herself in the process?

It began one morning when I woke up with a song running through my mind. It seemed to come from nowhere, complete with melody and lyrics. I had never heard it before. So I quickly grabbed paper and pen and wrote the words down. It was a song about loss. A woman was singing about missing someone she loved. It was haunting and beautiful, and I knew it had a story.

But what story? It had nothing to do with my life, and the voice singing it was not mine. I had just started writing fiction, and I knew it was a tale about a woman that would be mine to tell, if I accepted the challenge. I was excited. At first, I thought it would make a great Broadway musical. Why not? Here was the first song. All I had to do was come up with a plot and then more songs and then write a script.

I asked myself who the woman could be. Then she began to materialize in my imagination. Her plight and her situation and her loss evolved into a plot for a historical romance. And then I knew I had to write Jacy’s story as a novel. My second novel, after “Mercy’s Way.”

I live in Northeast Florida, and a grand, oceanfront hotel once existed near where I live. Called the Murray Hall, it was built in 1886 in what was then Pablo Beach (now Jacksonville Beach) and burned down only four years later, in 1890. At first, I thought about making that the setting for my novel. But the hotel was the only thing there at the time. Such an isolated place would limit the story. So I decided to set it in Cape May. It was a natural decision. First, people began traveling to Cape May via schooner in the 1820’s, and it was America’s first seaside resort. Second, everyone who was anybody in the Victorian era went there. It was a happening place. And third, my sister, Janet, works for the Mid Atlantic Center for the Arts & Humanities, which is essentially the town’s historical society. That gave me a connection to historians and books that allowed me to write with historical accuracy.

Even more important, for the purposes of the plot, Cape May had a lighthouse in1886. And that same lighthouse still exists today. People can still climb it. And when they do, they can gaze down upon the beach that looks much the same as it did in Jacy’s day: Beacon Beach.