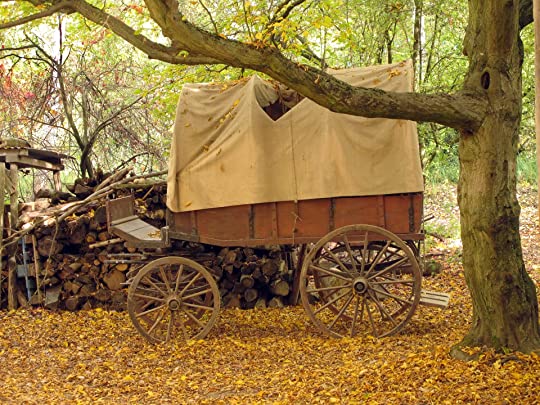 When I decided to set my historical romance novel, “Mercy’s Way,” on the Oregon Trail, I chose the year 1845. Historically, that was actually the third year pioneers traveled the route. By then, several wagon train caravans had taken part: I wanted my characters to be early participants, but not the first.

In 1843, the first major wagon train of approximately 1,000 pioneers headed west on the Trail. According to history.com, they departed from Elm Grove, Missouri (near Independence) on May 22. The train included more than 100 wagons with a herd of 5,000 oxen and cattle. Dr. Elijah White, who had traveled that way the year before, served as the guide.

My hero, Luke Owen, is likely a far more romantic figure than the real Dr. White. He is certainly no missionary. However, I did do extensive research on the Oregon Trail before I wrote my story. Everything about the sights, the landmarks and the Trail itself is as historically accurate as I could make it. The first section ran through the flat country of the Great Plains, where river crossings were dangerous. During the early years of the Trail, Native Americans were mostly friendly, although they did value the pioneers’ horses and often tried to acquire them by trade.

Pioneers often worried about being attacked by Indians but soon learned that the real threats to their lives and health came from injuries and illnesses: accidental gun shots, falling off horses or mules, drowning in rivers, and disease. Then, when they finally reached the Rocky Mountains, the Trail became much more difficult because they had to travel over rocky terrain. “Fiction is life with the dull bits left out,” Australian writer Clive James once said. The truth is, the real Oregon Trail was anything but romantic. According to the Oregon California Trails Association, roughly one out of every ten people who traveled it in the mid 1800’s did not survive.

But it sure must have been exciting. Those brave souls who embarked on the journey looked at Oregon as a paradise worth striving for. And it sure makes for an exciting setting for a romance novel.