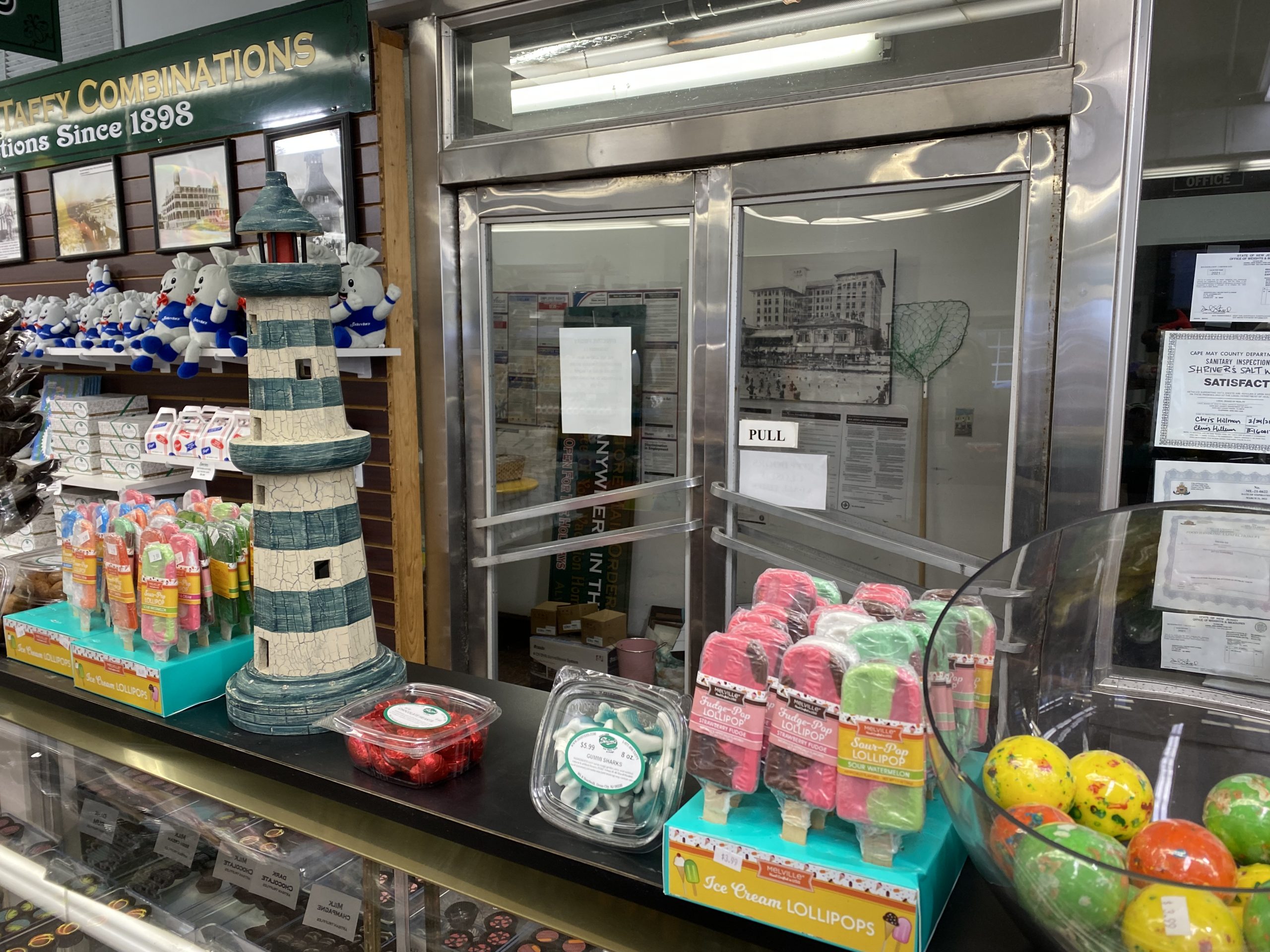 One of the many enjoyable things about writing historical fiction is doing research. For a history buff like me, it’s a fun way to explore other times and places and even more fun when a place that you’re exploring still exists.

For me, one of those places is Shriver’s Saltwater Taffy and Fudge on the Ocean City, New Jersey boardwalk.

I’m currently writing my fourth novel, a romantic mystery suspense starring a female private eye in 1955 Philadelphia, and a key early scene takes place at Shriver’s. A wealthy doctor’s wife walks into that popular candy store one day in May 1955 and never comes out. When her husband hires my heroine to find her, it kicks the story into action.

I chose to use Shriver’s as my location because I grew up going to the Jersey Shore and had been in that famous shop many times. I also knew that it has been there since the late 1800s, so it was definitely there in 1955, probably looking much the same as it does today. Shriver’s is proud of its long history. Historic photos are prominently displayed around the building, giving it a timeless aura, which I love.

When I wrote my scene, I had only a vague recollection of what the store’s interior looks like. Lots of candy behind counters, a place to watch the fudge being made, excited children waiting in line with their parents. That was about it, but good enough for my story.

Except, I needed a back door, leading to behind the boardwalk.I had no idea if Shriver’s had one, so I made one up in my imagination, which worked just fine for my purposes.

Then, shortly after writing the scene in February 2022, I was at the Shore, visiting family, and made a special trip to the boardwalk and Shriver’s. And to my delight, I discovered a glass door set in a side wall, unobtrusive, clearly meant for employees only, and likely unnoticed by most people. Through the glass I could see a few offices straight ahead and then to the left, a short hall leading to the fudge-making room, and just beyond that, another door open to the back of the boardwalk.

Yes! This was even better for my plot than I’d imagined. The fudge-making area sits behind a huge glass window where customers can watch workers whip up the goodies, adding intrigue and old-fashioned local color.

So after that visit, I rewrote my scene, making it even better and more real. Because that door is real.

I’m not going to reveal anything else about the plot, except to say that the door is important, because the missing woman could have slipped out of it, or been forced out. For my heroine, those are two possibilities among many maddening, intriguing ones that she has to investigate.

For me, finding the door in real life was a serendipitous surprise while doing historic research. I also learned that Shriver’s was founded in 1898 by William Shriver, making it the oldest business on the O.C.N.J. boardwalk. And that four brothers purchased the business in 1959 and that it’s been in that family ever since.

Of course, in real life, Shriver’s has never been the scene of a missing person mystery, or to my knowledge, anyway!

Making stuff up is the fun of fiction.

But I do love it when real life and fiction can intersect in some way. It brings make-believe to life.